Local inventors, entrepreneurs and like- minded innovators packed the October 21st meeting of the Edison Inventors Association. The room at the Edison-Ford winter estate needed more chairs. A lot more! The word was out. Louis Foreman was coming to Ft. Myers – to inspire those seeking success with product pursuit.

Mr. Foreman has admirable credentials of being appointed to a USPTO Advisory Committee and being a founding member of The Inventors Network of the Carolinas. He’s also the founder and Chief Executive of Enventys, a product design and engineering firm. He’s well armed with awards, recognition and accolades for volunteering, teaching and lecturing. Louis still finds time to visit inventor groups like ours. Surely he knows, we’re hungry for his words. 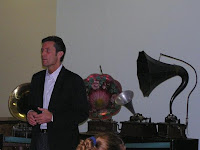 Louis Foreman couldn’t hide from his being an inventor/entrepreneur at heart. The audience heard tales of selling sports gear from his college frat house - which began a string of successful startups. He spilled hard-earned advice to his attentive listeners. He encouraged an early business evaluation of every “great idea”...

Verify their benefits of desirability, usefulness, cost and profit. Qualify, quantify and know your customers – and what they spend. Recognize the total package of retail realities and personal commitments you’ll face. What about financing, manufacturing, distribution and licensing? Inventors need a plan (a roadmap) for the total journey of their product pursuit and assured success. In short, a “great idea” isn’t enough! 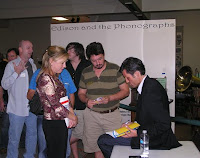 There’s no doubt Louis was appreciated for sensing our struggles, sharing secrets and relating to the audience. We applauded!

Copies of his book The Independent Inventor’s Handbook were sold fast and signed slowly – as Louis took time for friendly chats. He generously donated all book proceeds to The Edison Inventors Association. We thank Louis Foreman for being one of us – an inventor/entrepreneur at heart.
Posted by Tom Kershaw - Inventor In Paradise at 1:39 PM