A recent meeting of Edison Inventors Association included a discussion regarding patent qualification and availability. Several attendees voiced concerns about pursuing patents when their ideas resembled “improvements” or “combinations” of items already patented. As usual, specifics of each invention were guarded. But a common question was asked. Can you patent an improved product evolving from a combination of other ideas – whether new, old, patented or not?

MY easy answer is to simply comply with the requirements of a utility patent. It demands “uniqueness” - and there’s a chance your new idea will be deemed “obvious”. Both qualities are ultimately determined by authorities of the USPTO. Even then, rejections and issuances might be challenged. Either way, it’s a battle best avoided. So, it’s better to do a thorough search to prove worthiness of your idea - before wasting time, effort and money. Always consider the keywords: “uniqueness” and “obvious”.

Similarly, the combination of items, or the supposed improvements of such items must likewise be “unique”… and avoid the “obvious”. Simply altering things - like changing materials or adding wheels and brackets - may not qualify your improvement as being “unique”. The rejections for being “obvious” may imply that others would have considered, thought of or adapted such variations all by themselves – without your inventive foresight. Sorry, no patent for you!

An example of a successfully patented “combination” or “improvement” is presented in Robert Merrick’s book - Stand Alone, Inventor. He had the idea of attaching a transparent calendar to a watch crystal. How simple is that?

Early advisors discouraged Merrick’s pursuit of a patent. Calendars were already in use. So were watches. But, Merrick filed a “combination patent”. His attorney agreed Merrick; “had fashioned a transparent pressure-sensitive label with a monthly calendar printed on it, which is removably attachable to the crystal of a watch.” The USPTO also agreed, and awarded a Utility Patent for his “Watch With Transparent Calendar.” 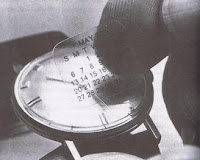 You stick or peel the calendar film

So there you go. It can be done. You can seek a patent covering the combination of known ideas or patented products. But, your idea must be “unique” - and avoid the “obvious”. Good Luck!
Posted by Tom Kershaw - Inventor In Paradise at 5:09 PM