Have you ever seen "Storage Wars" -  where they cut padlocks from units to auction the contents.
We own a small storage complex. Each unit has a roll-up door with a sliding latch. The latch shown is designed for two padlocks - one for the tenant (it's gone))...another (shown for ref) is for the facility to "over-lock" a "problem" unit (Supported by a Florida Statute).
A tenant said they didn't have the key for his padlock (not shown)....so they sawed the latch  to allow removal of his closed padlock...and slide the latch to enter his unit.
Of course, the locked padlock was a four dollar item (with no key).   The new latch cost  me $22.75 - and the time to remove, order and install a new latch.
P.S.  "Storage Wars", shows how quickly we can snip the lock (or grind it off) while avoiding destruction of the latch.   But - no worries....we always demand a tenant security deposit for such nonsense. 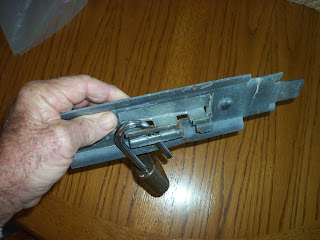 Posted by Tom Kershaw - Inventor In Paradise at 8:26 AM